Hidden Ireland: the stunning Three Castle Head and Dunlough Castle Cork. All you need to know for a visit to one of Ireland’s most beautiful sites.

It is one of the most beautiful places in Ireland I have ever come across and its name may suggest why: Three Castle Head is a green promontory lounging into the wild Atlantic waves and crowned by Dunlough castle, three medieval towers now in ruins.

It has all the elements of the quintessential Irish landscape: the infinite green lawns, the coast, the loughs and it has the advantage of being just about remote enough to attract only a handful of visitors. On the day we went there, we were almost alone, which added to the wonderful experience of being in such a wide and stunning landscape.

LOVE MEDIEVAL HISTORY? THEN YOU MAY ALSO LIKE OUR GUIDE TO KILKENNY MEDIEVAL CITY AND GLENDALOUGH MONASTIC SITE

Three Castle head is located on the Mizen peninsula, in the South West of Ireland. Despite, or maybe because of, its close proximity to the very well known Ring of Kerry, the peninsula doesn’t appear often on travel books and itineraries and this is probably a good thing.

The Mizen peninsula is stunning but part of its beauty is its remoteness and a contemplative atmosphere that make you mind wander to higher thoughts and engage with nature at a very personal and intimate level.

How to get to Three Castle Head: From Schull, follow road R591 East towards Goleen. After about 15 Km, turn right, following ‘Mizen Head’. After about 6Km, turn right at the T-junction and drive for about 2Km until you get to a little car park to the North of Dunlough bay. Bring comfortable shoes and be ready to climb for about 25 minutes

What to bring: comfortable shoes (runners are enough if the land is dry), a windbreaker, a drink of water. If you are visiting Three castle head with kids you may want to bring a picnic as there is no cafe in the immediate proximity to the castle.

We got to three castle head during a short trip to West Cork. Phil adores this part of the country and we made the most of the presence of our inquisitive grandparents to spend a family weekend there.

It was late August and we drove along the narrow roads so typical of this part of the country, dotted by the occasional house, flocks of sheep and the always reassuring presence of a local pub. I don’t like to use the word ‘authentic’ as it suggests that more modern sides of a country are less meaningful than traditional ones, but in this kind of setting indeed it is old Ireland that comes to mind: sparsely populated, windswept and breathtakingly beautiful.

We heard about the castle from a friend and after leaving the car in a tiny widening of the road, we followed him across what seemed (and indeed was) private farmland.

As strange as it may sound, this is not unusual in Ireland: many sites or interest are located on what is now private terrain but often the public maintains access rights that mean you can cross the land.

This is not always the case and it is important to double check local signage before you run the risk of trespassing, but don’t be surprised if the directions given by a local send you across an open field – that often IS the way to go and it perfectly legitimate! 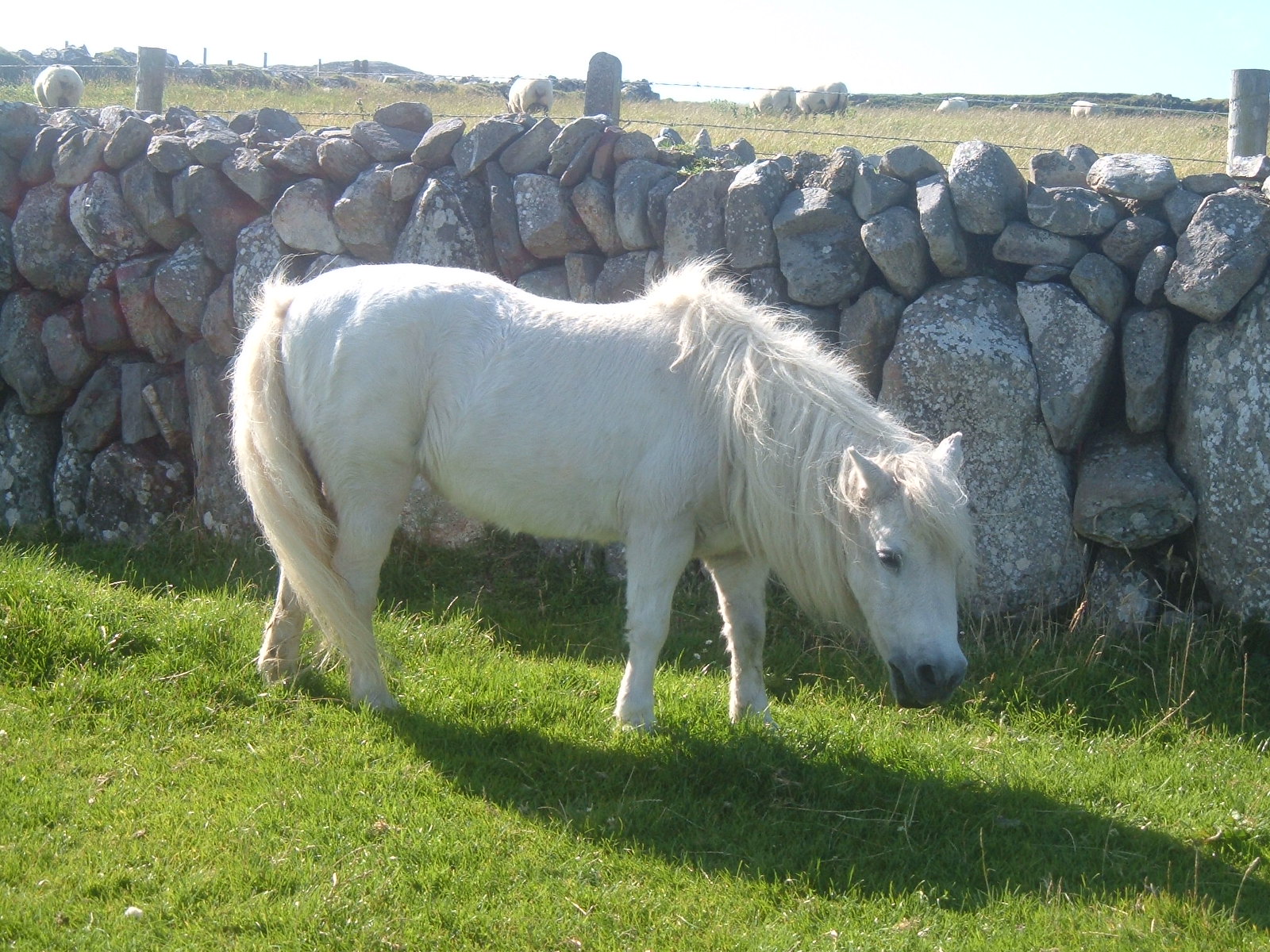 To get through Three Castle Head you cross private farmland: on our day there, we run into this friendly pony

After a short walk on grassy soil, we got to a first fabulous spot opening up onto the Atlantic. 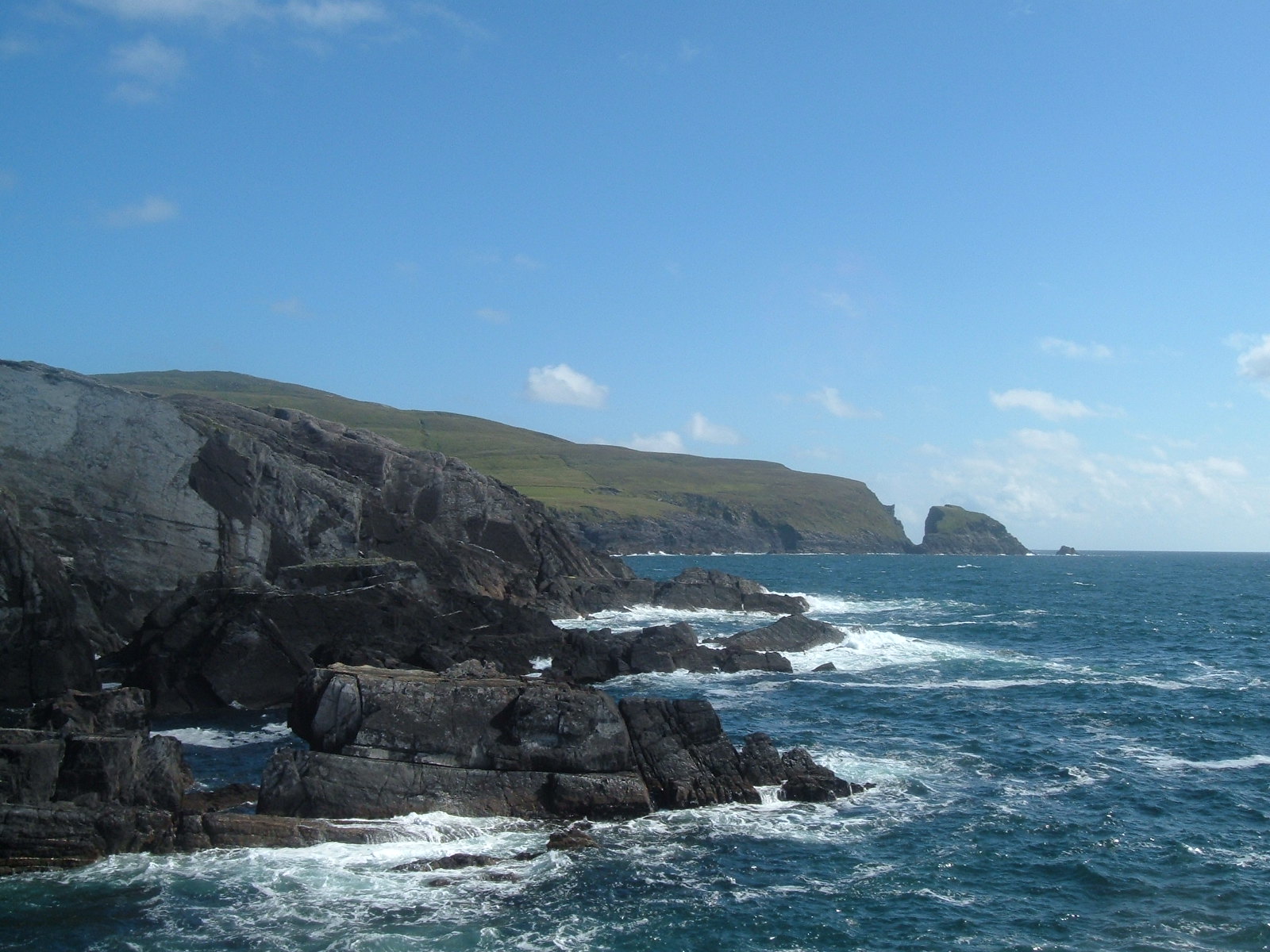 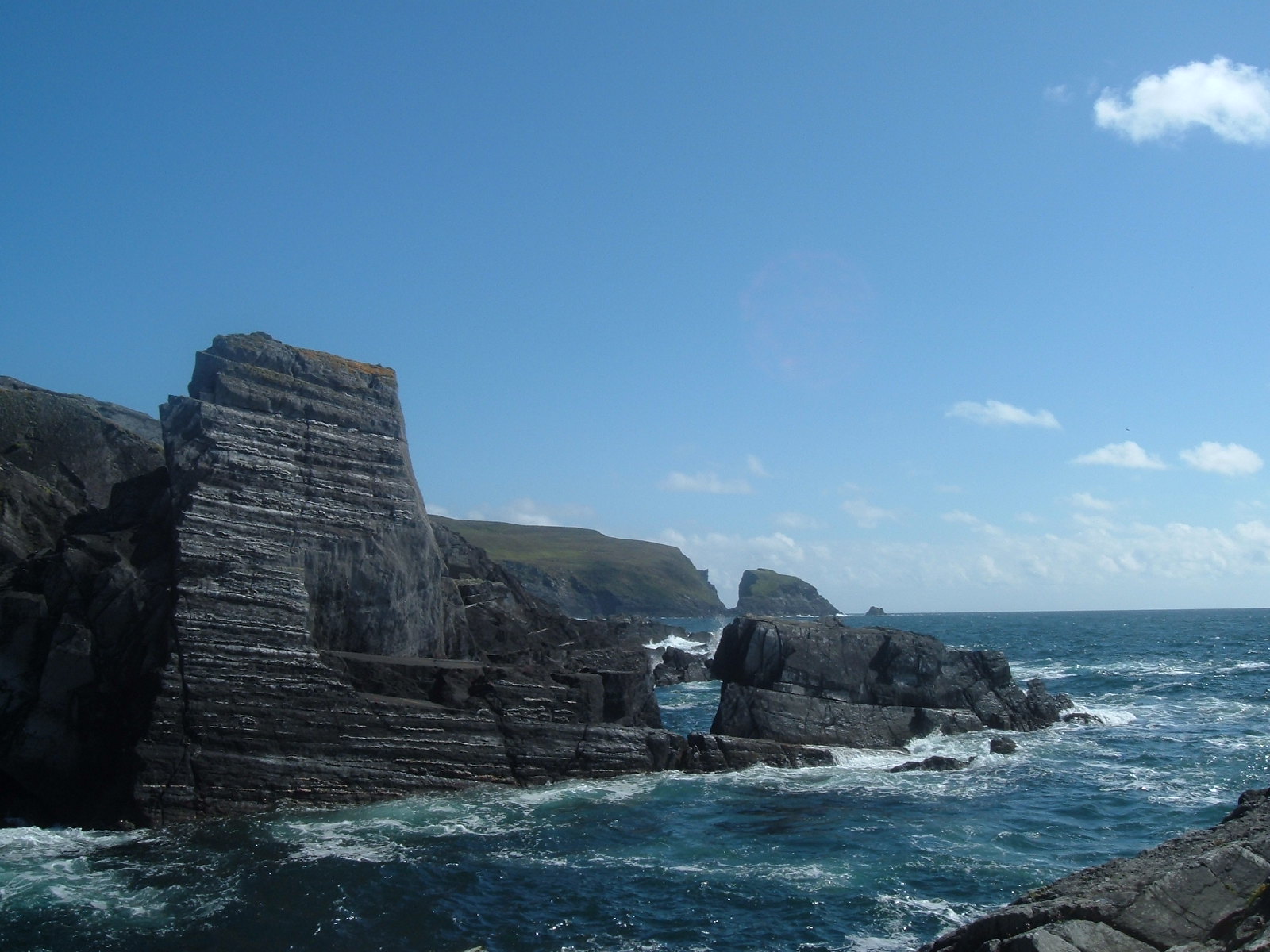 The ocean is always a powerful presence for me and there it was, crashing hypnotically against the grey cliffs plunging into its depths. This is not a place for kids to run loose but it is gorgeous and has a magnetic power that makes you want to climb farther and farther towards the water: if you have little ones, it is safe to have them on a carrier or anyway very close to you – the climb is not suitable for buggies and does open up onto open cliffs so caution is mandatory. 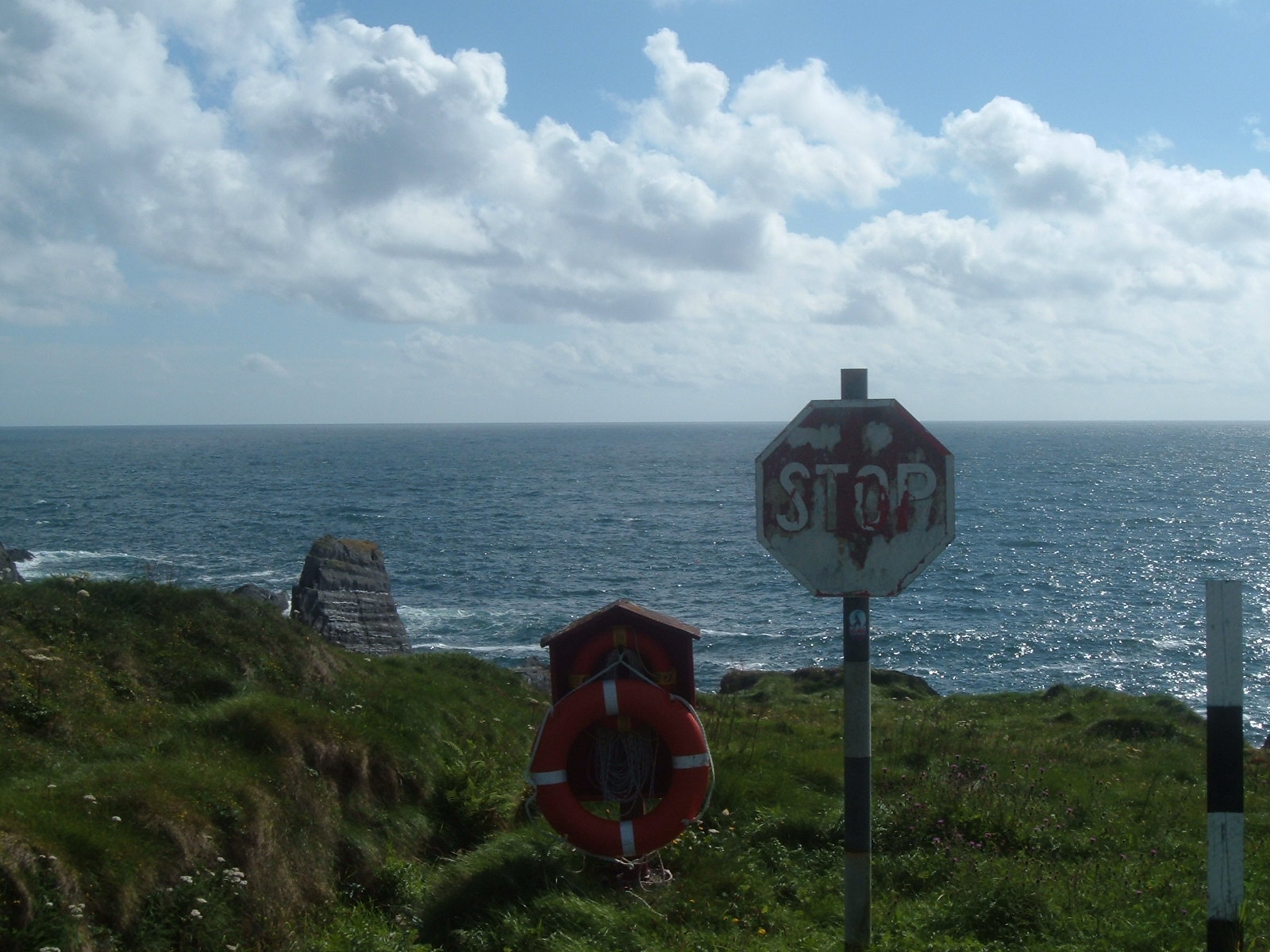 After taking in this beautiful aquatic scenery, we turned towards a path climbing up the hill, trusting the pace of our guide, who seemed sure of the way. If you don’t know how long the climb is or where exactly it leads you, the steep grassy path may seem to be leading you nowhere, but sooner than you think will reward your efforts.

From the top of the hill, the scene you have been hoping for opens up for you, with a wide valley sloping towards a medieval structure surrounded by grass and water. 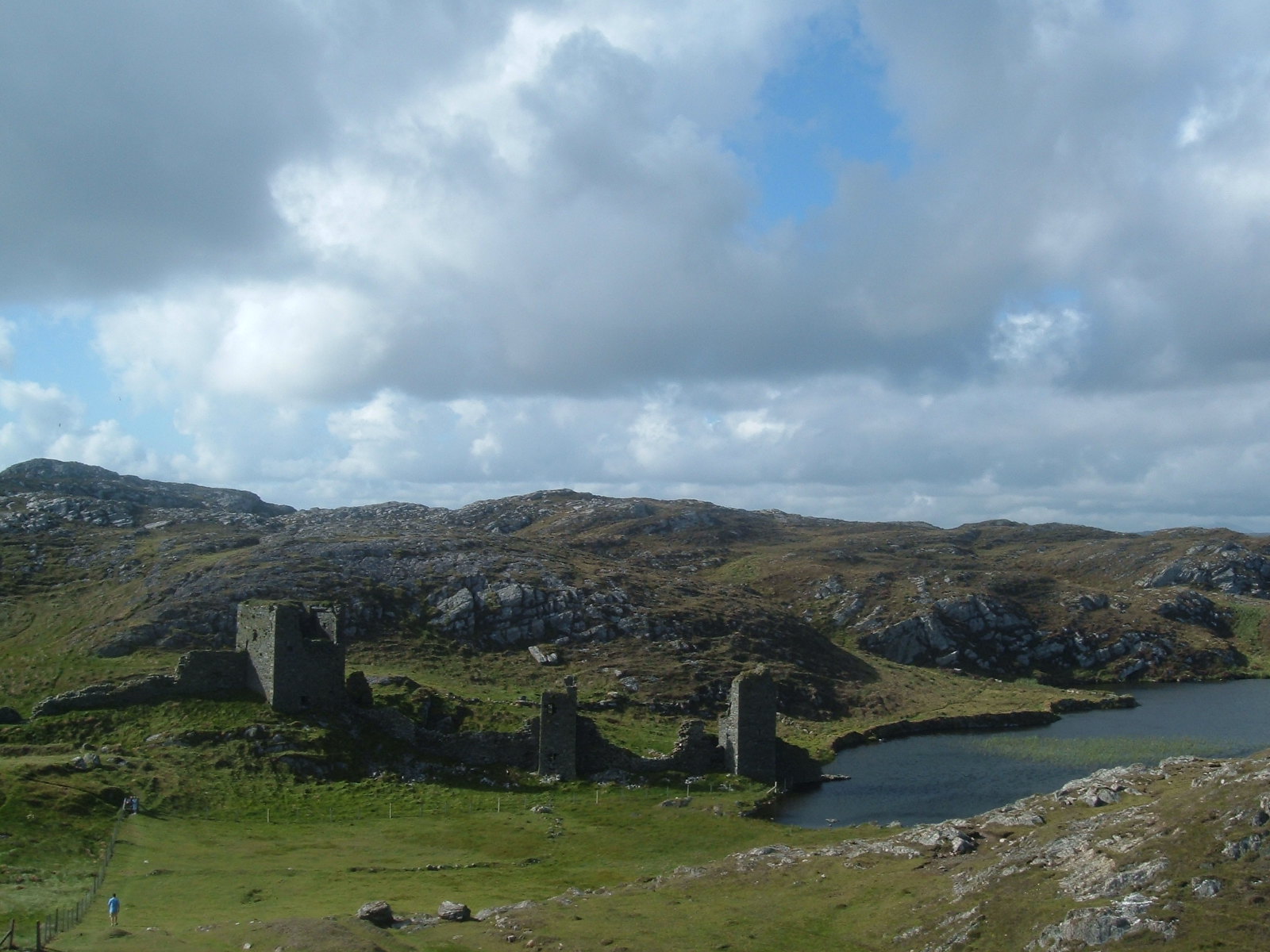 Dunlough castle was built around 1202 by the O’Mahony family who, under the lead of Donagh ‘the Migrator’ settled in this part of Mizen peninsula towards the end of the 12th century.

Rather than three separate castles, as the name suggests, is a structure made of three towers connected by a defensive wall spanning over 100 feet. The structure, now in ruins, comprises of several stories and has some architectural characteristics that make it different from many other isolated towers of the area: the castle is built with no mortar had several floors connected by spiral staircases and as well as a first story entrance used to have a second one just above, usually accessible by a removable wooden ladder. 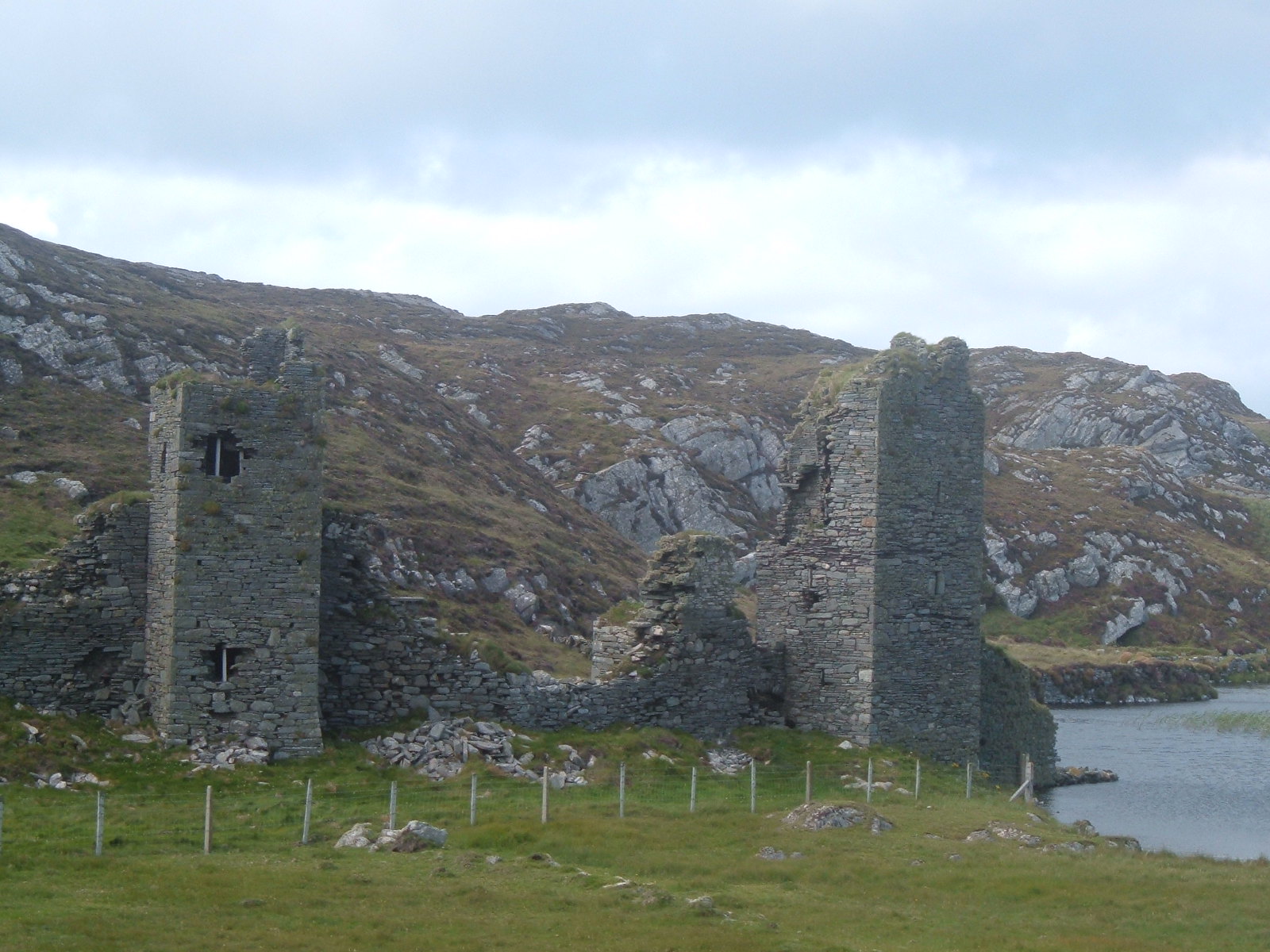 The castle stands in a geographically peculiar position, on the isthmus connecting three castle head to the mainland and this interconnection between land, water and stone is a powerful and immensely evocative sight. 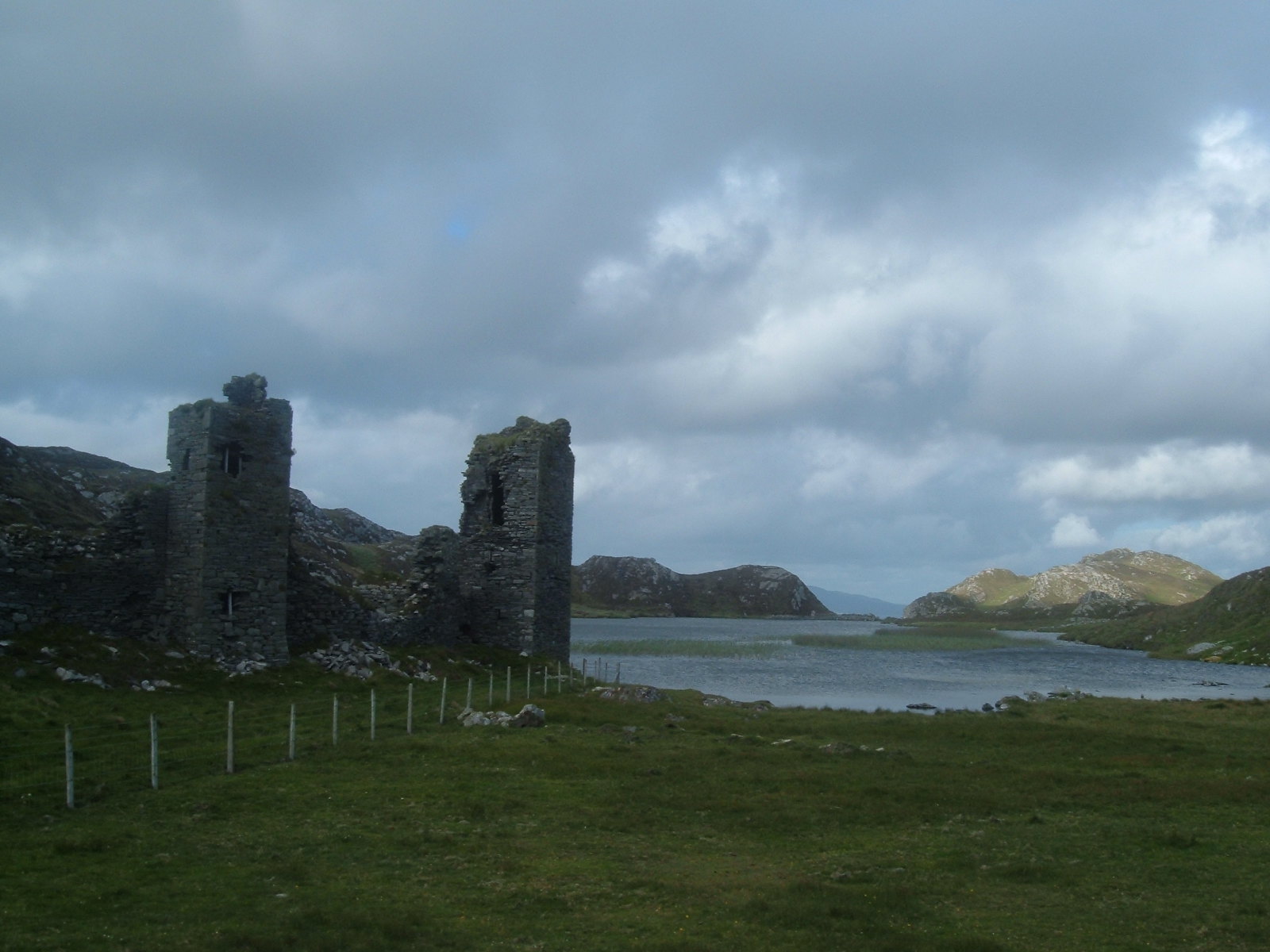 Dunlough castle embodies the idea of a magical place but the word of choice here should probably be haunted rather than magical.

History tells us that the O’Donohue family, who occupied the castle last,  was cursed by terrible fate: all the members of the family are said to  have died  by either suicide or murder and this violent history is apparently still remembered by these walls – legends report that a drop of blood falls every day from the of the towers, while other stories  claim that the site of the castle is inhabited by a white lady of the lake and that whoever sees her died on the spot.

Haunted or not, Dunlough castle is a place of great beauty and a location you should not miss if travelling in this part of Ireland.

COMING TO IRELAND? DON’T FORGET TO ALSO CHECK OUT OUR RECOMMENDED ITINERARY!

« The day I met my fear of butterflies: a story of travelling with phobias
Why I am dreaming of a family vacation to beautiful Bali, Indonesia »