When the hotel receptionist kept staring at her screen, my heart dropped: it was 5.30 am in Delhi, we had gotten off an overnight train journey from the north of the country that I had spent worrying about our early morning arrival in a massive Indian city and had just finished arguing with the cab driver who wanted to bring us to his friend’s hotel because ours ‘didn’t exist anymore’. Exhausted, I looked around me, at the luxurious 5-star hotel lobby filled with elaborate flower arrangements, and I just knew it: it was our very first time in a luxury hotel and we would be refused entry. Staying there would have been too good to be true.

While I was staring at my feet, philosophising about the juxtaposition of my Birkenstocks and the expensive marble floor, the receptionist’s pleasant voice reached my ears: ‘I just checked and we can give you an upgrade. Because you are on your honeymoon, right?‘

Myself and my fiance looked at each other: honesty, or more likely exhaustion, made us blurt out that actually no, we were not on our honeymoon and were not married either, but her worried expression soon made us regain our senses. Suddenly awake, we mumbled something along the lines of: ‘well, actually,  we are on our honeymoon, but we’re not getting married until next May’ (true). The clouds that had temporarily obscured her eyes disappeared and, happy again, she called an elegantly uniformed member of staff to usher us towards our room. 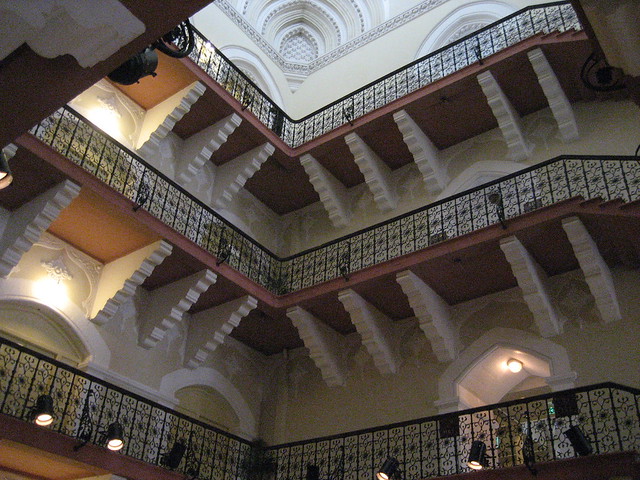 The inside of the Taj Hotel Mumbai

It was the most amazing room I had ever seen: the linen, the view, the service, the hot shower –  we felt guilty and overly self-indulgent, especially after seeing so much poverty during our trip, but enjoyed every little detail to a ridiculous extent. 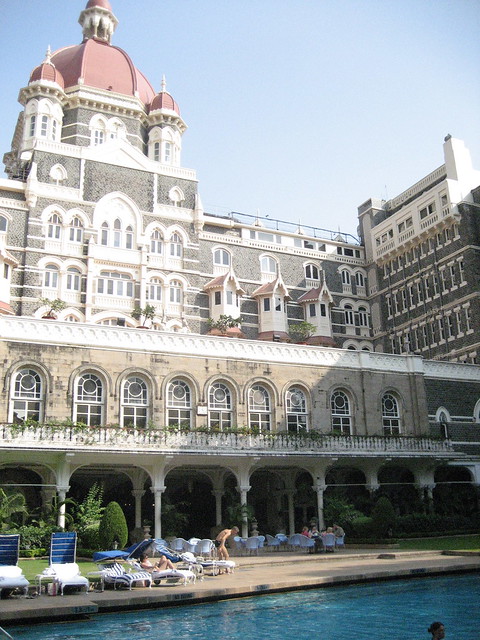 We had only one day in Delhi and we had decided on some of the main sights we would have absolutely wanted to see. Meaning well, we had even alerted a friend of a friend, who said she might act as our guide for the evening and show us the ‘real Delhi’,  but in the space of about one hour all these plans dissolved in the chlorine of the hotel swimming pool.  We didn’t leave the hotel for the following 24 hours and we spent the whole day between the pool, the beauty salon (Indian threading is the best, you leave looking like a Bollywood celebrity!) and the many restaurants.  It was shameful, culturally ignorant, against all our principles and it felt amazing. 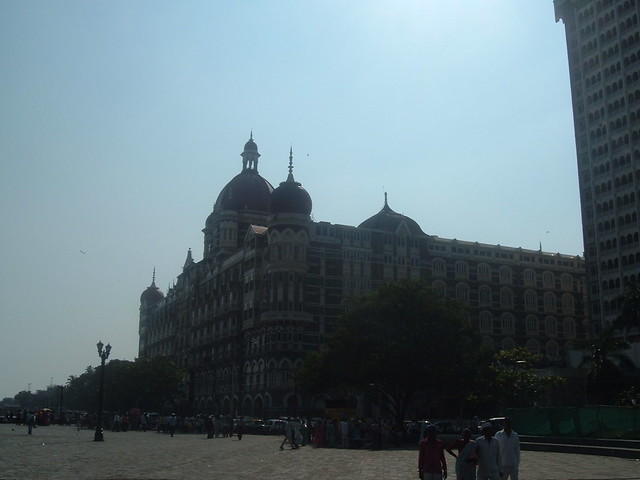 A week later we were still giggling at our luck for the marvellous upgrade when we checked in into our second 5-star hotel, this time in Mumbai (yes, we developed quickly a bit of a taste for them). The Taj Mumbai, reached after another long train journey, pushed the idea of luxury to a different level. Like in Delhi, we had booked only  one night there, online, and entered a wonderful lobby of flowers, livree-d staff  and marbles.

Rucksacks on our back, we slowly headed to the main reception desk, but we were soon told we would check-in in a private reception room. My insecurities popped up again and looking at our attire I immediately thought we were put in a separate area as unworthy of the beautiful surroundings. But a little nagging hope grew more and more prominent as we walked along the plush corridors and took hold when we were offered a complimentary drink: sipping my juice, I rejoiced at the now familiar words: ‘we gave you an upgrade, because you are on your honeymoon, right’? This time, our line was ready and strong with our wedding plans we checked into a room fit for a royal couple. 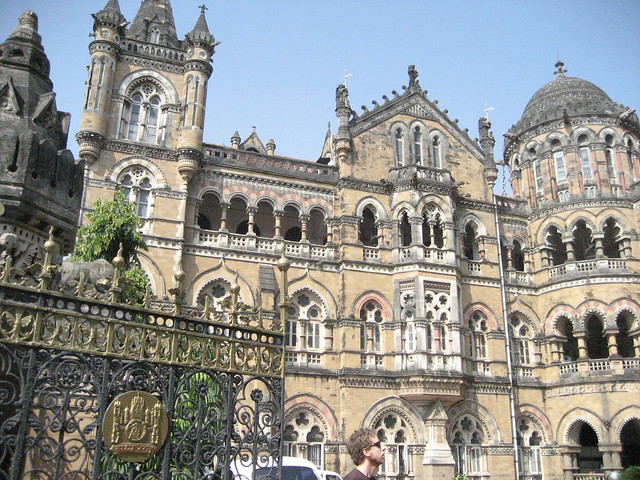 Luxury has a habit of making you quickly accustomed to its charms, but despite our wide eyes, this time we managed to peel ourselves away from the hotel and explore the city of Mumbai. We didn’t venture too far, in the few hours we had, but we still were able to take in some of the atmosphere and some of the sights and we even compensated our ignorant stay in Delhi with a very interesting visit to the nearby synagogue. 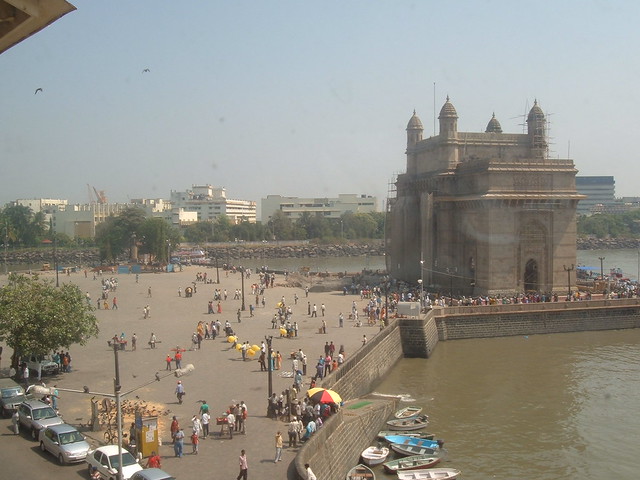 The gateway to India, as seen from our hotel room 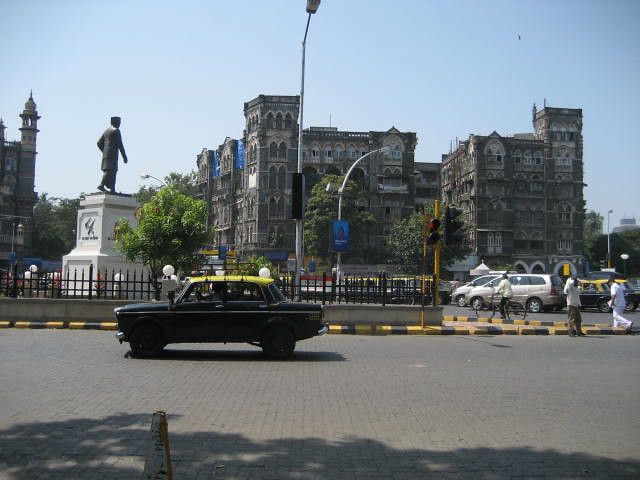 Mumbai city and its famous taxis

Mumbai’s Synagogue and an unexpected (for us) cultural discovery

While walking on Mumbai’s streets, our eyes were caught by a peculiar light blue building, by the name Knesset Eliyahoo. The synagogue was open to non-Jews for visits and we entered to have a look. Once in, we were welcomed and introduced to the story of the place: built in 1884 the synagogue is the second oldest Sephardic synagogue in the city and was originally built by the Iraqi Jew Jacob Elias Sassoon. Deciphering our surprised expression, our guide told us that in India there is a vibrant community of Jews from various Middle Eastern countries (he named mostly Iraq and Syria) who immigrated to Mumbai and thrived in this multicultural and multi-religious city.

It was a very interesting visit and, for us, the perfect counterbalance to an otherwise self-absorbed time in a city that, I believe, has so much beauty and culture it would deserve a lifetime of exploration. 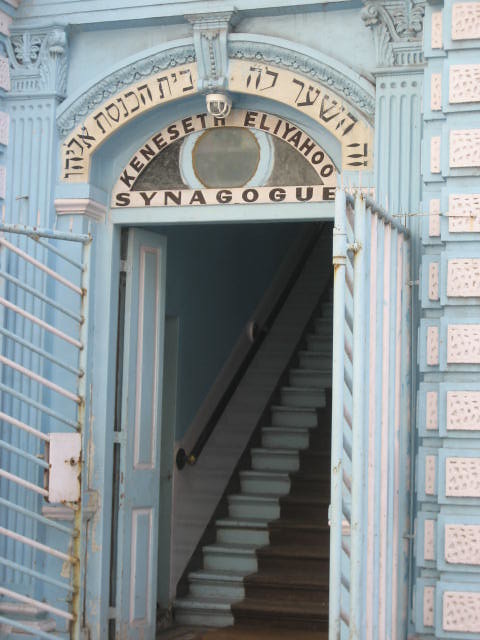 Important note: We visited India in October 2008 and, sadly, just two weeks after we left this marvellous country we heard that two of the places mentioned in this post were subject to horrendous terrorist attacks. The Taj and the synagogue were both violently attacked and innocent people lost their lives, in terrifying circumstances. So while I recall the beauty and the privilege of our experience, I want to close this post on a more sombre note,  thinking of all the people who in so may parts of the world are victims of conflicts and also with a hope, for myself, that the enjoyment of luxury never makes me forget the important things in life. 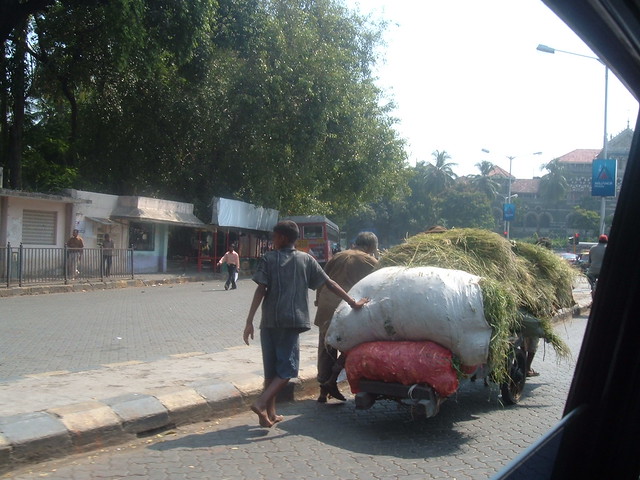 On the streets of Mumbai 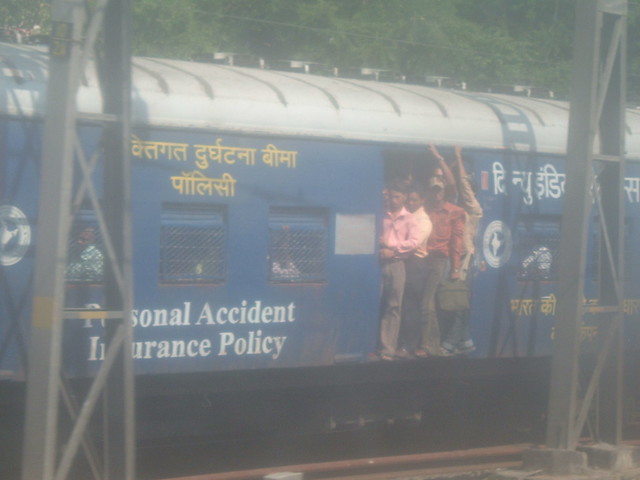 Fancy a taste of India tonight? Then try this tried and tested chicken curry recipe, shared with us by the Indian mum of a friend of ours!

Heat the oil in a pan: the best ones to use are non-stick, heavy bottom ones. Add bay leaf, star anise, cardamon pods,  cloves and onions. Fry all  until  the onions are  golden brown (try to keep the heat not so high that they burn). Add ginger and garlic and fry for 30 seconds, then add chilli powder, gharam masala, cinnamon and  turmeric powder. Mix well. 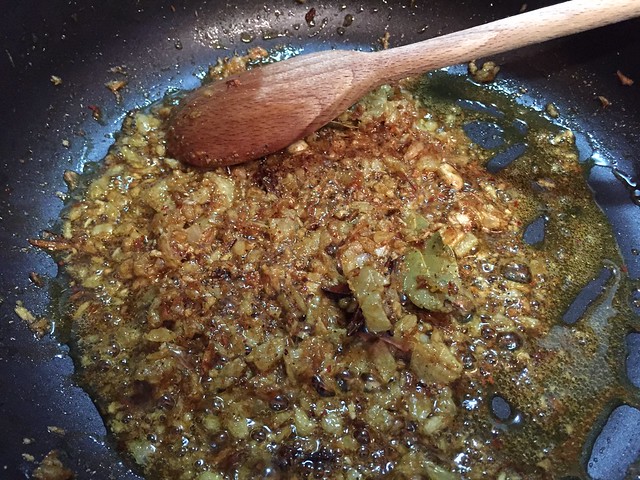 Add the chicken and fry on high heat for 3 minutes or so, until sealed, then add the potatoes, tomatoes and the curry leaf.  Finally salt and chilli to taste. 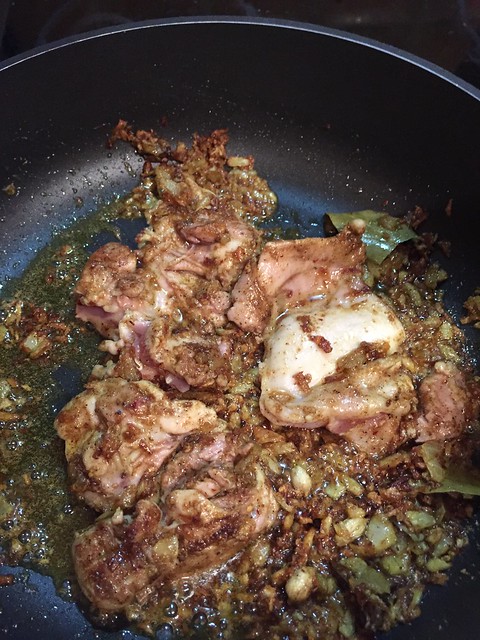 Mix well, cover with a lid and cook until potatoes are soft – check regularly to make sure there is enough liquid and the ingredients are not sticking to the pan: If necessary, add little boiling water from time to time and immediately cover the pan again not to disperse the heat.

While the curry cooks, make your homemade roti:

Ingredients for the roti

Use a heat resistant bowl to mix the ingredients to form a soft dough. Paying attention not to burn your hands with the hot water, knead the dough for about ten minutes (don’t skive off, the result is not the same if done for less!) – you will soon have a very smooth, non-sticky dough. Roll the dough into the shape of a long sausage and then break it down golf ball size pieces and roll out. Roll each of the balls out on a surface covered with flour to form very thin sheets of dough.

Heat up a non-stick, heavy bottom pan and toast one roti at the time in it: place the first roti in the pan and leave for about 30 seconds on one side. Flip and let it cook for a little longer: you will soon see that the roti will start ballooning (literally!): this is normal, but you should knock out the air to make sure the roti stays flat. To do that you can use a spoon or a previously cooked roti. Roast until one inside is brown, then flip again and cook the other until golden on both sides. As soon as the first roti is ready, rest it on a teatowel, covered, and rest subsequent roti on top of the first one. When all ready, use them as a wrap around your delicious chicken curry. 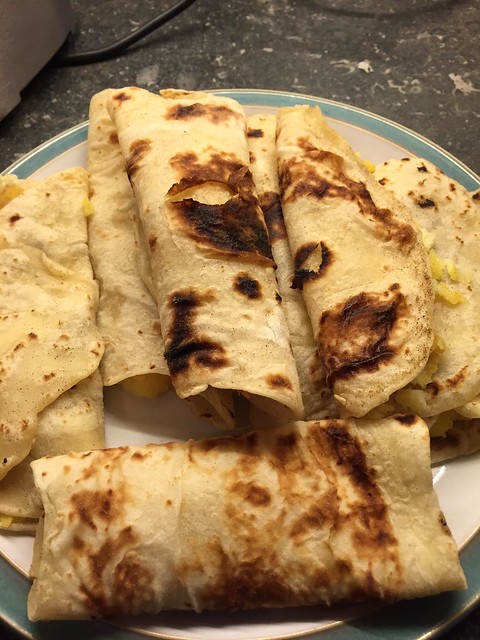 So, what do you think? I do hope you try this recipe and if you do, let me know how it comes out!

« Fun and interesting facts about ‘Pancake Tuesday’ + most delicious recipe for crêpes
The day we listened to the Dalai Lama in Dharamsala, India »