I love discovering new places, but some cities have such a special pull on me that no matter how many times I visit them, I still long to go back. One of them is gorgeous San Francisco, the city we visited last summer and one I seem to never get enough of.

Our San Francisco family trip was three weeks long (It included trips to Sonoma, Muir Woods, Monterey and Yosemite), but the city is so rich in culture and treasures that I already find myself wishing I could go back: ‘even just 24 hours in San Francisco with kids would be ok with me’, I keep saying to  my husband, as we go once again through the pro and cons of going back to the other side of the world for the second year in a row.

It is not that he doesn’t want to go, he adores the city too, but when it comes to wanderlust he is the one in the family who wears the practical hat and who tries to put into reality my sometimes too visionary travel plans. In this case, the question he poses me is legitimate: San Francisco is a massive city rich of culture and activities – what would you even do with just 24 hours in San Francisco with kids? Should be getting a one-day layover there, what would you do and what would you prioritise to see with kids, with such a short amount of time?

I always take practical travel questions as a bit of a challenge and so I came up with an itinerary for my perfect 24 hours in San Francisco with the children. On my day there, I would touch on some of our favourite finds from last year and tick off some foodie experiences we have missed out on our first trip.

These are my perfect 24 hours in San Francisco with kids

What would you do with 24 hours in San Francisco with kids? My itinerary for the perfct day in San Francisco includes some of the city most iconic landmarks, parks and of course some food stops our whole family loved

Dotties’ true blue cafe is a very special place for me and one that taps into my childhood memories (teenage years memories I should say). The very first time I visited San Francisco I was 15 and came here all the way from Italy with my mum. Our hotel was just beside this little joint and we used to sit here every morning, feeling every day more and more like a local, thanks to the lovely service and generous portions. Here is where I practised my then very shaky English (I still remember ordering ‘

Here is where I practised my then very shaky English (I still remember ordering ‘breads’ – plural because I wanted many slices) and where I learnt that in the US you have free coffee refills, something I did and I still now find one of the most civilised of traditions.

The Presidio and Golden Gate Bridge

I don’t know if it is its colour, its iconic shape or its position framing the entrance to the Pacific, but the Golden Gate Bridge is for me a very special sight. My heart aches to go back when I think of it so my one day in San Francisco would have to include it.

When we visited the first time, we went in the late morning and we would do the same this time: in the early morning you are likely to find fog hiding it, but later in the day you may be lucky and see it in its full splendour. with kids, the Presidio, where the bridge is, is fantastic and really easy to enjoy: our kids loved that you travel around it by bus (since they were toddlers, they adored all things transport) and tried their hand at balancing stones on the shore, while I lost myself in contemplation of the engineering feat that the bridge is and in the blues extension of the biggest ocean on the planet.

When we visited the first time, we went in the late morning and we would do the same this time: in the early morning you are likely to find fog hiding it, but later in the day you may be lucky and see it in its full splendour. With kids, the Presidio, where the bridge is, is fantastic and really easy to enjoy: our kids loved that you travel around it by bus (since they were toddlers, they adored all things transport) and tried their hand at balancing stones on the shore, while I lost myself in contemplation of the engineering feat that the bridge is and in the blue extension of the biggest ocean on the planet. 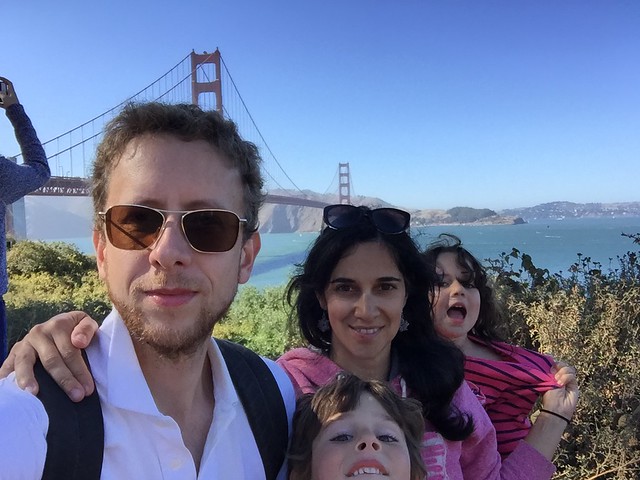 If I was really good at planning this one day in the city, I would make sure I was in the presidio during one of their family days when they have food stalls and activities for the kids – a pic nic lunch with a view over the bay is pretty special 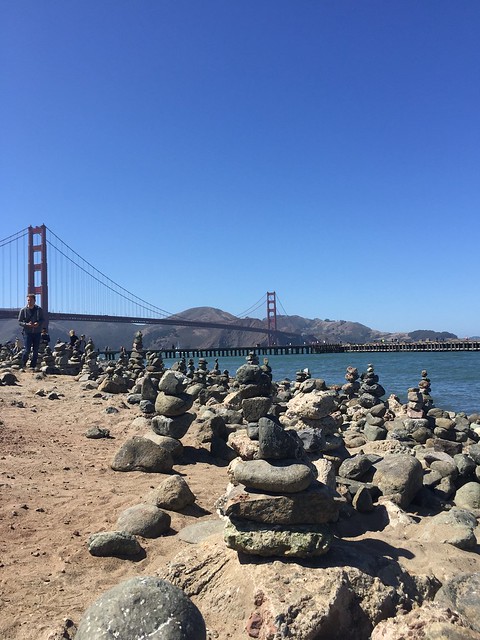 People have conflicting feelings about Ghirardelli square, one of the most famous tourist drags in San Francisco, but I love it and I would definitely include it in my itinerary.

What I love about it is that there is a tiny strip of sand there and you and put your feet in the icy water of the bay. In the summer, I saw people swimming but that’s not something I would ever dare trying: what I would do thought it to put my toes in taking in the beautiful views. 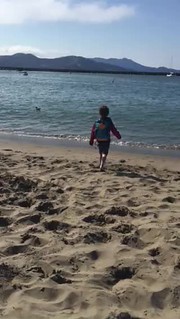 A short video taken at Ghirardelli Square: nothing is more fun than terrorising seagulls

No trip to Ghirardelli square are would be complete for our family without a stop for ice cream at the Baked Bear, where you get your ice cream sandwiched between a selection of cookies and topped up with sweets of your choice 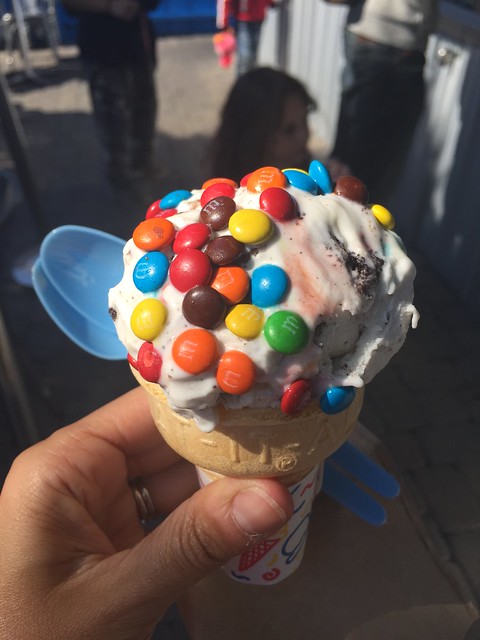 Few things are more iconic than San Francisco cable cars and from Ghirardelli Square, you can take one that brings you all the way to Lombard street through China Town. It’s a wobbly and fun ride and if you get off at Lombard street you get a lovely view over telegraph tower.

Lombard street is known as the ‘most crookedest‘ street in the world: while it isn’t, it sure is one of the most scenic and, for the kids, has a great advantage: at the bottom of its steepest part, there is a fantastic playground. It is called the ‘Joe di Maggio’ playground and my children dubbed it ‘ the best playground in the world’ thanks to a big slide and a strange contraption that lets them test their balance. 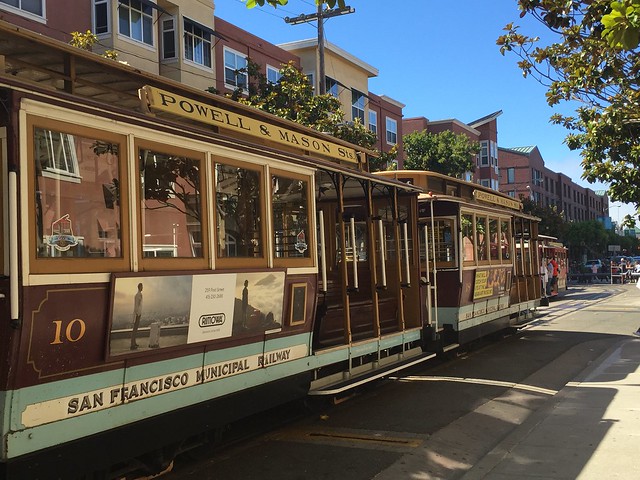 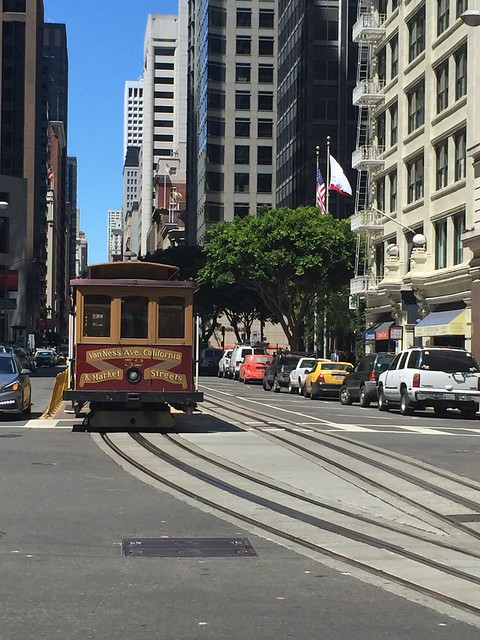 Ding din, make space for the cable car! they are surprisingly fast and as charming as expected 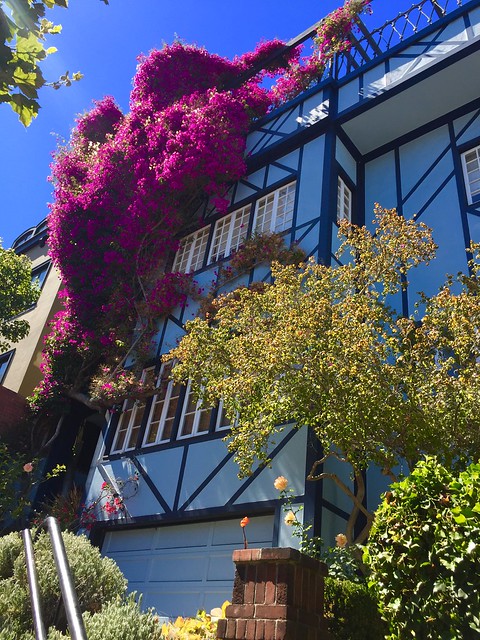 Lombard Street is famous for being crooked but even more than that, it’s its colours that make it special

Pier 39 is pretty overwhelming, especially with kids: the crowds here are crazy, the food overpriced and the shops made for tourists. That said, I always enjoyed strolling here and the view you get over Alcatraz is special.

Also, pier 39 is where to see the famous sea lions. I was worried they may be hard to find but they make their presence know: follow their barking noise (Do they bark? Or bellow? Whatever the correct name is, it is distinctive and you can’t miss it!) and let the kids scream with laughter at the surprise of so many fluffy animals gathered to get warm during the San Francisco temperamental summers! 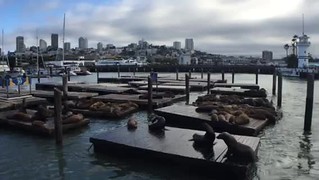 What noise do sea lions make? Click on the video (it’s only 5 seconds long) to find out!

San Francisco in known for cable cars but its streetcars are as iconic and, under many respects more useful. They follow the curve of the bay and bring you all along the piers touching, among other things, Pier 39, the Exploratorium and the ferry building.

Here is where I would end my afternoon: I would let the kids loose in the playground just in front of it (how amazing is this: a city with a gorgeous playground in its financial district? That’s what I call family friendly) and then have a juicy burger on the terrace of the ferry building market place 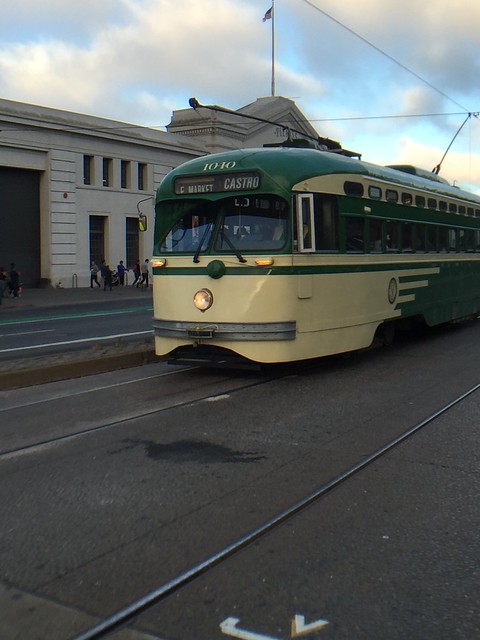 San Francisco’s cable cars are world famous, but I fell in love with the city’s vintage looking streetcars: they come in several colours and the kids would kill the time waiting for them trying to guess which colour the next one would be 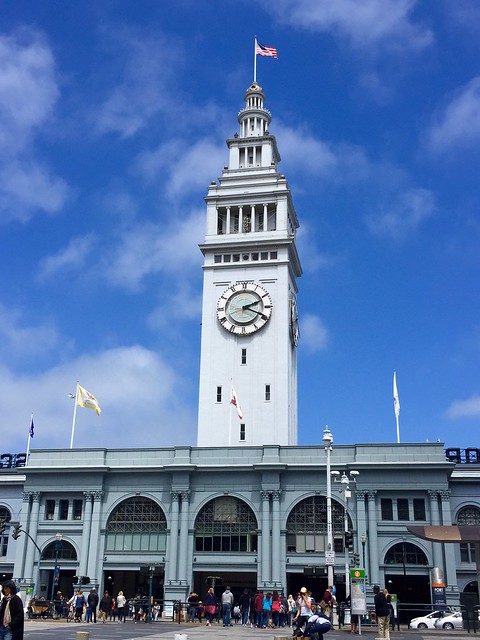 We spent an inordinate amount of time at the Ferry building during our family trip to san Francisco. From Berkeley, the BART would stop just in front of it and the lure of the burgers served in its market proved irresistible – I believe we had one there almost every day for over two weeks!

By this time, my 24 hours in San Francisco would be well and truly over and I believe with this itinerary I would have at least tackled some of my craving for this gorgeous city. Have you been to San Francisco?

What would YOUR 24 hours in the city look like?