When I was a child, I was an avid Trivial Pursuit player. I loved the ‘cheese slices’ you had to conquer to win and I always got great satisfaction whenever I would get an answer right. I guess I inherited my love of trivia from my über intellectual family, as much as my ineptitude in answering any of the questions in the category ‘sports’ (I’m sure it’s still the case, although a few more categories would probably leave me unsure nowadays).

I was about 10 when I was at the height of my Trivial Pursuit obsession and I still remember a question, or rather an answer, that left me speechless. The question was:

What city in the world has the highest number of fountains?

Now, at the time I had no idea what the answer to that might be, but I was a child growing up watching American movies and thinking all the weird and wonderful had to be in the States, so I randomly said the city with the highest number of fountains was New York. Blinded by love for a place I had never even visited!

You can imagine my surprise when I was told that actually the city in questions was Rome: Rome! The same city I was born in, the city I was growing up in, and by all means the city I was playing board games in. I was left speechless.

The record  breaking city was not far and exotic: it was just outside my door, if I was just open minded enough to properly look at it

Since that day, I developed a small obsessions for Rome fontanelle or nasoni (big noses, as they are known) and I always notice them. I also often stop and drink from them, even if I’m not thirsty, just to partake of this very unique feature. 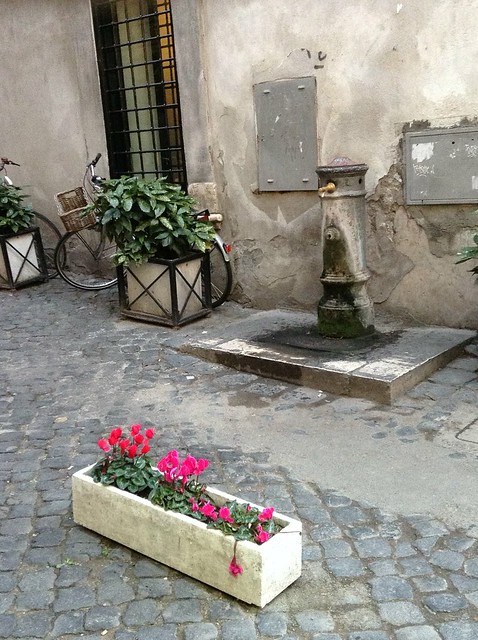 Le fontanelle made their first appearance in Rome in 1874, when the Comune built them to distribute clean, drinkable water the capital, for free. They were, and are, made of cast iron and they pour water from a slim tube that resembles a long nose, hence their name. In Rome there are 2500 nasoni (!) and while some of them are now dry, you can still find many functioning ones, with fresh, clean and super refreshing water. The Romans and the Italians in general are very proud of them (I sure am) and le fontanelle are now at the heart of a project called ‘free to drink’, that campaigns for their survival against the trend that wants us buy water in plastic bottles.  Among other things, the project shared a map of the fontanelle, which I think is cool and that you can find here: mappa delle fontanelle di Roma

As well as nasoni, in Rome you can also find a different kind on fontanella, usually in parks, made of travertino rather than cast iron.

These fontanelle were called fontanelle della lupa imperiale (of the imperial she-wolf, you’ve got to love this name) and their name comes from the wolf head the water used to come out of. Now very few of them have the wolf head (I remember it when i was a child though, never thinking much of it…) but the fontanelle are still there and you can drink from them remembering Romulus, Remus and the long story the humble fountain commemorates.

Fontanella della lupa imperiale, still very much in use

Incidentally I just discovered the second city in the world for number of fountains is Kansas City!!